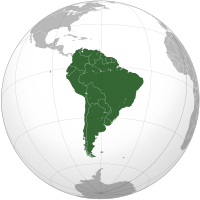 South America (Spanish: América del Sur, Sudamérica or Suramérica; Portuguese: América do Sul; Quechua: Urin Awya Yala; Guarani: Ñembyamérika; Dutch: Zuid-Amerika; French: Amérique du Sud) is the southern continent of the Americas,] situated in the Western Hemisphere and mostly in the Southern Hemisphere, with a relatively small portion in the Northern Hemisphere. It is bordered on the west by the Pacific Ocean and on the north and east by the Atlantic Ocean; North America and the Caribbean Sea lie to the northwest.
The word America was coined in 1507 by cartographers Martin Waldseemüller and Matthias Ringmann, after Amerigo Vespucci, who was the first European to suggest that the lands newly discovered by Europeans were not India, but a New World unknown to Europeans.
South America has an area of 17,840,000 square kilometers (6,890,000 sq mi), or almost 3.5% of the Earth's surface. As of 2005, its population was estimated at more than 371,090,000. South America ranks fourth in area (after Asia, Africa, and North America) and fifth in population (after Asia, Africa, Europe, and North America).