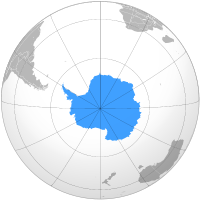 Antarctica (pronounced /ænˈtɑrktɪkə/ ( listen)) is Earth's southernmost continent, encapsulating the South Pole. It is situated in the Antarctic region of the southern hemisphere, almost entirely south of the Antarctic Circle, and is surrounded by the Southern Ocean. At 14.0 million km2 (5.4 million sq mi), it is the fifth-largest continent in area after Asia, Africa, North America, and South America. About 98% of Antarctica is covered by ice, which averages at least 1.6 kilometres (1.0 mi) in thickness.
Antarctica, on average, is the coldest, driest, and windiest continent, and has the highest average elevation of all the continents. Antarctica is considered a desert, with annual precipitation of only 200 mm (8 inches) along the coast and far less inland. There are no permanent human residents, but anywhere from 1,000 to 5,000 people reside throughout the year at the research stations scattered across the continent. Only cold-adapted plants and animals survive there, including penguins, seals, nematodes, tardigrades, mites, many types of algae and other microorganisms, and tundra vegetation.
Although myths and speculation about a Terra Australis ("Southern Land") date back to antiquity, the first confirmed sighting of the continent is commonly accepted to have occurred in 1820 by the Russian expedition of Fabian Gottlieb von Bellingshausen and Mikhail Lazarev. The continent, however, remained largely neglected for the rest of the 19th century because of its hostile environment, lack of resources, and isolation. The first formal use of the name "Antarctica" as a continental name in the 1890s is attributed to the Scottish cartographer John George Bartholomew. The name Antarctica is the romanized version of the Greek compound word ἀνταρκτική (antarktiké), feminine of ἀνταρκτικός (antarktikos), meaning "opposite to the north".
The Antarctic Treaty was signed in 1959 by twelve countries; to date, forty-six countries have signed the treaty. The treaty prohibits military activities and mineral mining, supports scientific research, and protects the continent's ecozone. Ongoing experiments are conducted by more than 4,000 scientists of many nationalities and with various research interests.